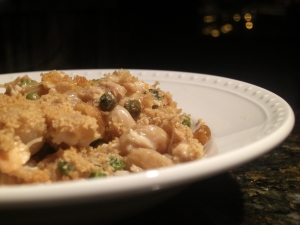 After days and days of overcast skies that turn dark at 3:30pm, comfort food again topped my list of things to make me happy…er second to family…third to friends. But it’s up there on the list. 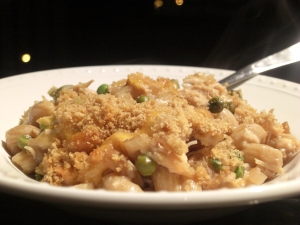 I set out to make tuna noodle casserole only to find I had no tuna. What I did have in the pantry was canned chicken. It’s simply chicken breast diced and in a can, much like tuna. I cringe when I say chicken from a can because I am well aware the idea of canned chicken is not palatable (to put it nicely). But, if you have not tried it I recommend you do and get back to me. It is very tasty and makes a great buffalo sauce dip and chicken salad. I had some cans in waiting and this was their opportunity because I was not going to haul my cookies out to get tuna. 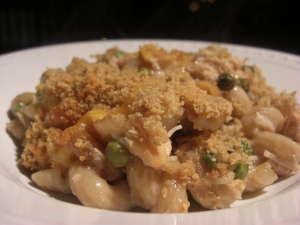 It took me about 30 minutes to whip this together and another 30 until it was on the table, hot and bubbly out of the oven.

Cook onion in 1 1/2 tablespoons butter with a pinch of salt in a large skillet  over moderately low heat, stirring occasionally until softened, about 5 minutes. Increase heat to moderately high, cooking until slightly carmelized but take care to not burn.  Add frozen peas and soy sauce. Add Sherry and boil mixture, stirring occasionally until liquid has evaporated. Remove from heat.

Melt remaining 3 tablespoons butter in a 2 to 3 quart heavy saucepan over moderately low heat and whisk in flour, creating a roux. Whisk for about 2 minutes. Add broth in a stream, whisking and bring to a boil. Whisk in milk and simmer sauce, whisking occasionally for 5 minutes. Stir in onioin and pea mixture, lemon juice, and salt. Flake chicken into sauce and stir gently. Season with salt and pepper.

Cook noodles in about 4 -5 quarts of boiling, salted water until al dente (or the noodles have barely a bite). Drain noodles and return them to the pot. Add sauce and stire gently to combine. Transfer mixture to baking dish, spreading evenly.

Toss bread crumbs and cheese together in a bowl. Drizzle 1 tablespoon of olive oil over crumbs and cheese and toss again.  Sprinkle evenly over casserole. Bake until topping is crisp and sauce is bubbling, 20 to 30 minutes.